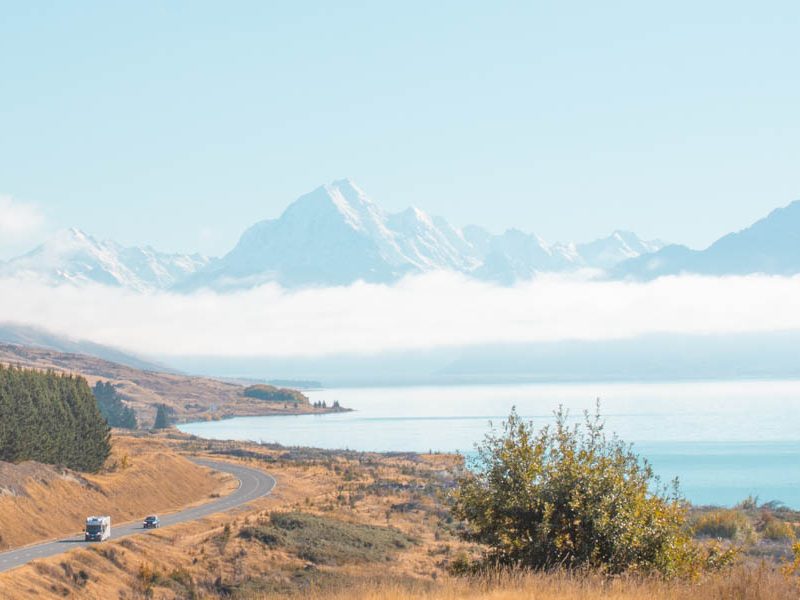 Home to Lorde, mountainous views, Lord of the Rings and the other country that is “down under.” Hint: it’s not Australia!

New Zealand is such a beautiful place; it’s easy to see why so many people flock to this small country.

Having traveled to New Zealand 3 times over the last year, I’ve been fortunate to learn quite a lot with every visit.

To help my fellow travelers, I’ve put together a guide to things to know before you go to New Zealand on your epic road trip adventure:

Where does the name Aotearoa come from? Aotearoa is the Maori name for New Zealand, which translates to “the land of the long white cloud.” Initially, this name was given to New Zealand’s North Island but is now used to refer to New Zealand as a whole.

2. Maori words and culture are incorporated in everyday life in New Zealand

As Australians, we were surprised but also delighted by the prolific use of Maori words.

Greetings like “Kia Ora” (Maori for welcome) are incredibly common.

3. Speaking of the local lingo, there are phrases and words which are New Zealand specific

Flip flops (or Thongs if you’re Australian) are referred to as “jandals” in New Zealand.

“Chilly bin” is used to describe a cooler box (you know the one you use to keep your drinks cold?)

4. New Zealanders are a friendly bunch, and they’ll refer to themselves as “Kiwis”

The name Kiwi comes from a flightless bird native to New Zealand, also called the Kiwi. These adorable birds are listed vulnerable (one of the species is listed as near-threatened), and they are an icon for New Zealand!

This means when you enter the country, you will be asked to declare all food, vegetables, and equipment that has come into contact with the outdoors (e.g., hiking boots).

When you arrive in New Zealand, it is crucial that you take this seriously.

If you lie on your form or forget you’re carrying food, you can face fines or even jail time.

Anything you bring into New Zealand (especially fruit and vegetables!) can impact agriculture/ farming and can even destroy the local economy.

6. The emergency telephone number in New Zealand is 111

If you dial this number, you’ll reach the police, ambulance, fire brigade or search and rescue.

7. Campervans / RVs seem like they would be budget-friendly… But they’re really not

Before I visited New Zealand, I was always under the impression that renting a camper van was the best (and most budget-friendly way) to see this beautiful country.

But when I started planning my road trip, it quickly became apparent that renting a camper van would end up costing more than if we rented a small car and stayed in motels/hostels.

Often campervans are only worth the money if you plan on staying in New Zealand for an extended period of time (we’re talking a couple of months to a year!)

Before you go, do the math!

When I first saw these slogans around information centers, I laughed.

I mean, how different could New Zealand roads be?

Turns out that sometimes the dashed line in the middle of the road disappears (you know the line separating your lane from cars driving in the opposite direction? Yeah, that one!)

When we were driving from Queenstown to Glenorchy it suddenly hit is why we kept on seeing signs telling us that New Zealand roads are different.

Take your time when driving in New Zealand!

Psst: also you’ll be driving on the left side of the road in New Zealand. So if you’re from Europe, USA or Canada (or anywhere where people drive on the right) be prepared for your driving experience to be a lil’ different!

Petrol or gas (as I know my American friends call it) can get expensive here.

Do not underestimate fuel costs, because they add up, and since you’re driving long distances can take a big chunk out of your budget.

For my budget travelers to New Zealand, I’ve put together a guide to traveling in New Zealand on a budget!

10. New Zealand is a loooong country, so you’ll be driving long distances at times.

This doesn’t sound like a lot but remember: you can’t drive direct between these two points, and often you’ll need to circle back.

So do not underestimate the distance of New Zealand!

11. The many towns and cities scattered across New Zealand are incredibly different

You might land in New Zealand’s biggest city, Auckland, bustling with office workers and international connections.

But later on in your trip, you might make your way down south to Wanaka, a busy (but not always depending on the season) tourist town.

These places couldn’t be more different, and as you stop at even smaller towns you’ll notice that they’re so different.

Keep this in mind when planning your trip and remember that this is where New Zealand’s charm lies.

12. The North and South islands are almost like different countries!

Yes, the North and South Islands are part of the same country, New Zealand but they at times can be worlds apart.

The South Island is home to New Zealand’s biggest city, Auckland and often feels incredibly international in terms of diversity. We found the North Island to have incredible beaches too, which reminded us of home (Australia)

The South Island, on the other hand, was home to the most incredible mountain views we’d ever seen. It also felt quieter, more relaxed.

When you visit both islands of New Zealand you’ll soon realize they’re very different places in terms of scenery but also culture!

When a hike is labeled as “difficult,” they really mean difficult!

14. There are no dangerous animals in New Zealand

What a relief, I hear you sigh.

Because New Zealand has Sandflies, and if you’re visiting the west coast (e.g., Milford Sound, Arthurs Pass) you will come across these suckers and suddenly wish you hadn’t.

Sandflies (also known as Midges) will bite you, and leave you with the most intense itchiness you’ve ever experienced.

Yes, these guys can be worse than mosquitoes!

They are around most times of year (even winter, though less prolific) and you will get bitten. When you visit, make sure you purchase sandfly repellant from local supermarkets.

15. Make sure you wear sunscreen here!

Every time I visit New Zealand, I’m astounded by the number of tourists I see who are sunburned.

The sun here (even when it’s not summer) is especially harsh in this part of the world.

There is a hole in the ozone layer not far from New Zealand and less pollution to block the sun’s UV rays.

This means that the sun is especially harsh in New Zealand compared to other parts of the world.

Remember to “slip slop slap” with sunscreen before you head outdoors!

16. Car parks at popular tourist spots can get crowded (and run out of parking spots!)

While New Zealand is a popular tourist destination, not all parts of New Zealand have expanded to accommodate the growing numbers of tourists.

This includes car parks at popular hikes or walks. E.g., Roys Peak in Wanaka. This car park can get packed, and result in people parking on the road!

To avoid waiting for car parks during peak season, make sure you arrive at any hikes in the morning, as early as possible.

17. Do not attempt to drive in Queenstown (sooo not worth it!)

Queenstown is sooo much busier than you might expect. We visited Queenstown after Wanaka and expected it to be similar to Wanaka.

Boy were we wrong – there were traffic jams here!

When visiting, do not attempt to drive into Queenstown – walk from your hotel (and make sure you book one that is walking distance!)

But Queenstown is so picturesque, it’s worth ditching your cars for a couple of days:

When I lived in Boston, it seemed like speed limits were not always adhered to.

People seem to speed or go over the limit all the time.

New Zealand is probably not the best place to apply this same attitude. Speed limits here (like in Australia) are taken very seriously, and if you are found to be speeding, you’ll get a fine!

Was there anything in this guide to things to know before you go to New Zealand that surprised you?

Regardless of how long you’re visiting for, or where you’re going, you’re bound to have an amazing time!

Did you like this article? Pin it for later!