Why, hello there! This post might contain affiliate links, which means I earn a commission (at no extra cost to you!) if you purchase from them.

I only managed to visit Hiroshima after my third visit to Japan, and that was only after living in Tokyo for 3 months! Honestly, I wish I had visited sooner and if you have the time in your itinerary, I would highly recommend including Hiroshima (with a side trip to Miyajima Island!)

To help others visiting Hiroshima, I’ve put together a Hiroshima Itinerary.

If you’re planning on spending 1 day in Hiroshima (or longer!) read on if you want some tips on planning your Hiroshima itinerary!

Why should you visit Hiroshima?

Hiroshima is the capital of Hiroshima Prefecture, located in the southern part of Japan (it is south of Tokyo). Known for its violent past, Hiroshima is where the United States Army Air Forces dropped an atomic bomb on August 6th, 1945 towards the end of World War II.

Despite its sad past, there is so much to be learned from visiting Hiroshima.

This modern city pays respect to its past, with a museum and various memorials which are worth visiting. Visit Hiroshima because you want to learn and understand Japan’s history and part in the war.

The timing of our visit was around when North Korea was launching test missiles across South Korea. This was a sad reminder of how dangerous nuclear weapons are to human existence, and it was hard to not connect the horrors of what happened to the people of Hiroshima.

How long should you visit?

Hiroshima is such a historically significant place, we’d recommend spending at least 1 day in Hiroshima.

While Hiroshima can be visited as a day trip from Kyoto / Osaka, it can be at least a 1.5 hr train ride each way from either city.

This means you’ll spend at least 3 hrs on the train between Kyoto / Osaka and Hiroshima!

This is a long time, so we wouldn’t recommend it! If you are short on time, Hiroshima is still worth a visit, however, we’d recommend spending the night here so you don’t feel rushed. We also suggest spending 1 day (and overnight if possible) on the nearby island of Miyajima.

Want to read our Hiroshima Itinerary?

Located in the Hiroshima Peace Memorial Park, this museum is dedicated to remembering the events that led to the fateful day when an atomic bomb as dropped on the city of Hiroshima. The museum also has first-person accounts of what happened and the after-effects of the atomic bomb.

The personal accounts are a sobering and shocking insight to the destruction and hurt humans can cause to each other.

Especially since we were visiting around when North Korea’s nuclear weapons were featured so heavily in the media, it was a sobering reminder of the dangers associated with nuclear weapons.

Opening hours: 8:30 am – 6 pm daily (with slightly shorter hours in winter, check at their website!)

Reflect at the Peace Memorial Park

After learning about the horrific accounts of what happened after the Atomic Bomb was dropped on Hiroshima, you’ll probably want a quiet moment to reflect!

Located right next to the museum is the Peace Memorial Park. I recommend visiting in this order, as the memorial park has more context if you visit the museum first.

While you’re here, make sure you visit:

This is probably one of the most moving monuments in the Peace Memorial Park.

This monument was inspired by a Japanese girl by the name Sasaki Sadako. Sasaki was sick with radiation sickness after the bombing, and she was inspired to fold 1,000 origami cranes when she was sick. In Japan, it’s believed that if you successfully fold 1,000 paper cranes, your wish will come true. Unfortunately, Sasaki passed away before she could achieve her goal, but here you can fold origami cranes and leave them in a display. 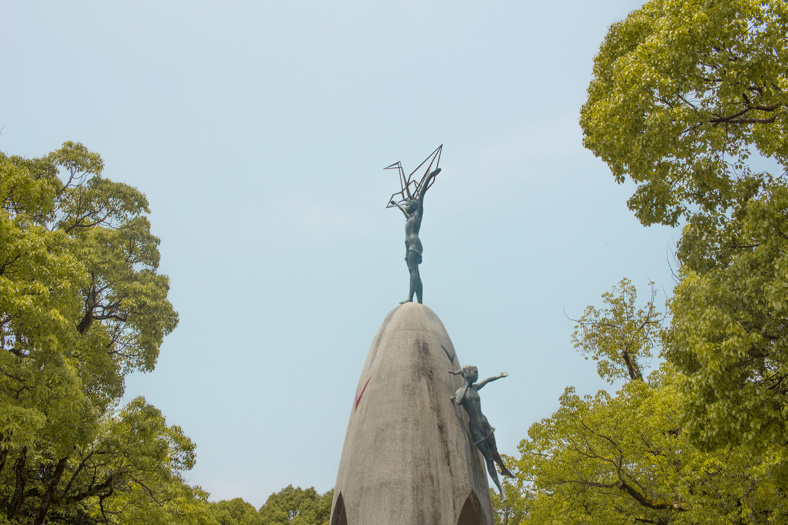 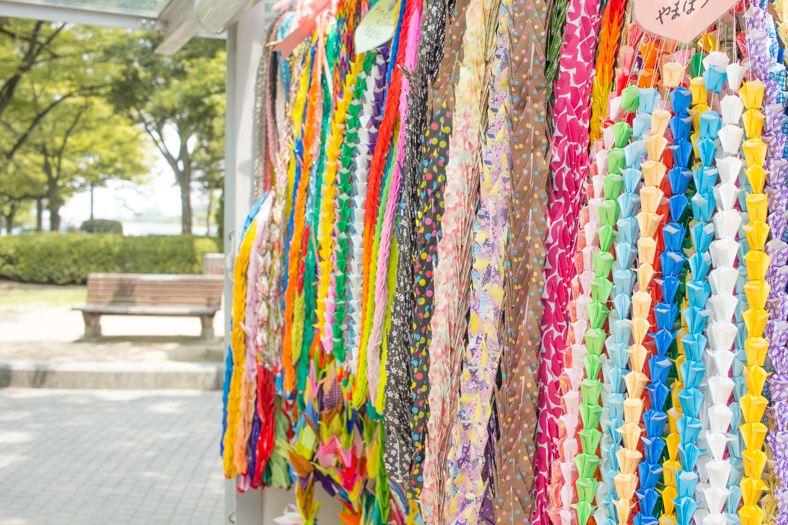 A reminder of the destruction: Atomic Bomb Dome

Located across the river from the Peace Memorial Park, the Atomic Bomb Dome is where the Hiroshima Prefectural Industrial Promotion Hall used to stand. This is located near the center of the bomb and was left to show the destruction that occurred as the result of the atomic bomb.

How to get here: the Atomic Bomb Dome is a short walk from the Peace Memorial Park. It’s just a 3-minute walk from the Children’s Peace Monument, just across the bridge. 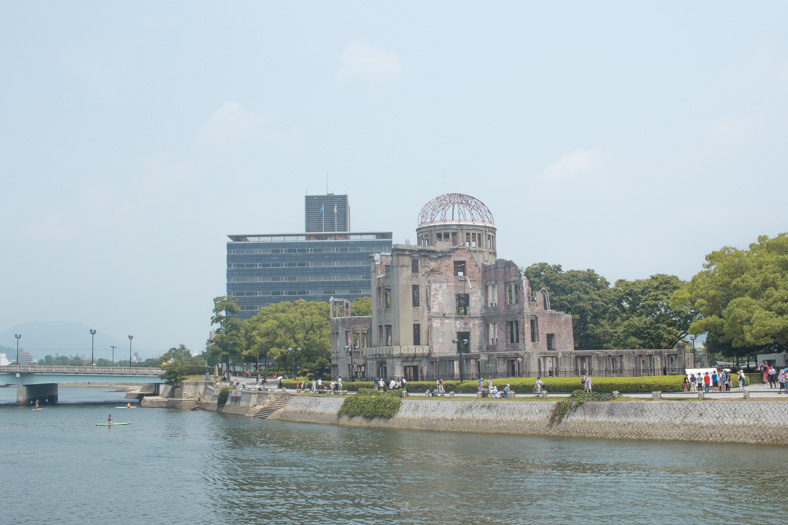 View of the Atomic Bomb Dome

Afternoon: relax at the Shukkei-en Garden

After what will undoubtedly be an intense and heavy morning, it’s time to have a moment to relax at the Shukkei-en Garden.

This beautiful garden is from the early Edo Period (originally built in the 1620s!) The original garden was destroyed by the atomic bomb but has since been rebuilt. At the center of the garden is a pond, which is surrounded by small tea houses

After a long day, make sure you get some okonomiyaki for dinner. This is one of Hiroshima’s most famous dishes. Okonomiyaki is a savory pancake (seriously, this stuff is delish guys – so don’t be weirded out by the idea of having a pancake for dinner – it’s not like a regular sweet pancake!)

It consists of noodles, fried egg and is topped with batter, cabbage, and pork. Depending on your preferences you can also get cheese or seafood. 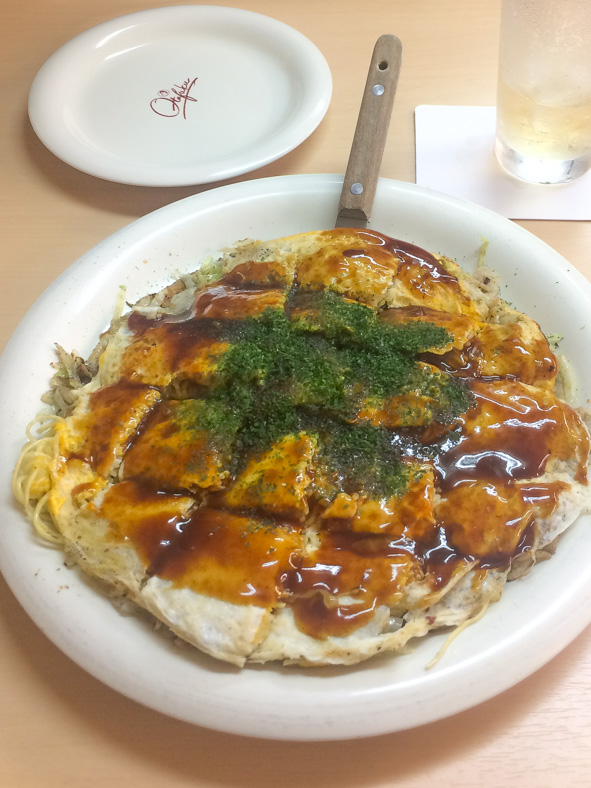 Please excuse my poor quality phone photo – I swear this was delicious! 😉

If you have extra time while you’re here…

I’ve mentioned this above, but I definitely recommend including a visit to nearby Miyajima Island to your itinerary!

Miyajima Island can be visited as a day trip (or half a day) from Hiroshima and is a must, especially since you’re in the area.

The island is known for its floating torii gate (note: this is currently closed for renovations) but the island is picturesque, has beautiful views and even deer!

My favorite resource for planning travel between cities is the Japan-Guide website. If you need tips on how to get to Hiroshima (from Tokyo, Osaka or Kyoto) check out this Hiroshima travel guide here!

How to get around Hiroshima

There are 2 main ways of getting around Hiroshima. This is via bus or tram (also known as the streetcar).

Getting around via tram:

This was my main form of public transport when in Hiroshima (I’m from Melbourne, so would pick a tram over a bus any day!)

A couple of tips for using the trams in Hiroshima:

Getting around via bus:

The bus routes are extensive in Hiroshima. If you have more time in Hiroshima or want to visit places that aren’t listed in this itinerary, there’s 100% a bus that’ll take you there!

A couple of tips for using the buses in Hiroshima: 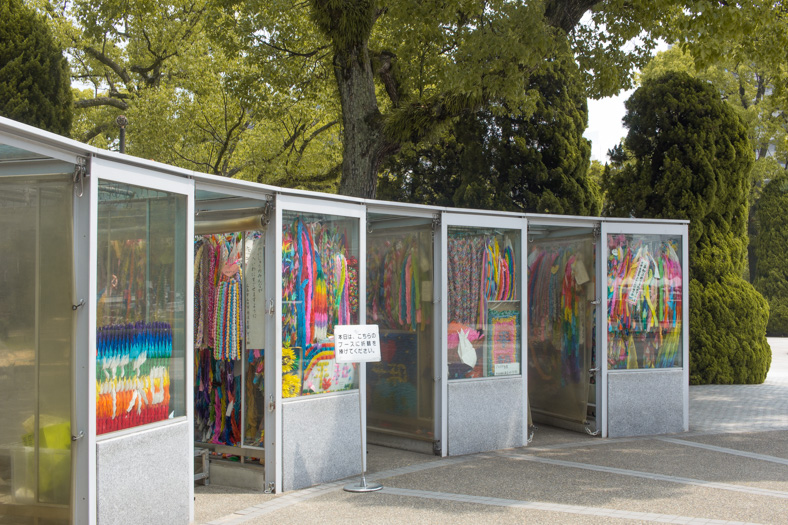 The many cranes at the Children’s Peace Monument

Where to stay in Hiroshima

Planning a trip can be a lot of work, and if you hate adding accommodation research to your list of things to do, I’ve got you covered! I’ve listed the best places to stay, depending on your budget and have also provided details as to their location. Check it out here:

I’m a big fan of the K’s Hostel chain in Japan – all their guesthouses and hostels are clean, well looked after and have super friendly staff! Their Hiroshima hostel is no exception.

They have mixed dormitories, a female-only dormitory and the option of super affordable private rooms. If you’re not a fan of sharing a room or like a bit of privacy, the private rooms are a great budget-friendly option.

Location: K’s House Hiroshima is a 10-minute walk from Hiroshima Station, making them great if you are in Hiroshima for a short period. They are also nearby a tram stop and bus stop, making Hiroshima’s attractions very accessible via public transport.

If you’re on a budget: Hotel Sunroute Hiroshima

We stayed at Hotel Sunroute when we were in Hiroshima. Our room was clean, had a comfortable bed (so important when you’ve been spending your day sightseeing!) and everything we could possibly need. The decor in the hotel was a little dated, but honestly, we weren’t complaining given the friendly smiles and comfortable room!

If you have a mid-range budget: Hotel Granvia Hiroshima

If you’re looking to treat yourself without breaking your budget, the Hotel Granvia Hiroshima is a great option. This hotel has more modern decor (especially compared to other budget-friendly options), is clean and spacious.

Location: Hotel Granvia Hiroshima is located right next to Hiroshima Station! This is a great option if you don’t want to take your luggage on public transport (it can get pretty tiring!) or if you’re short on time in Hiroshima. 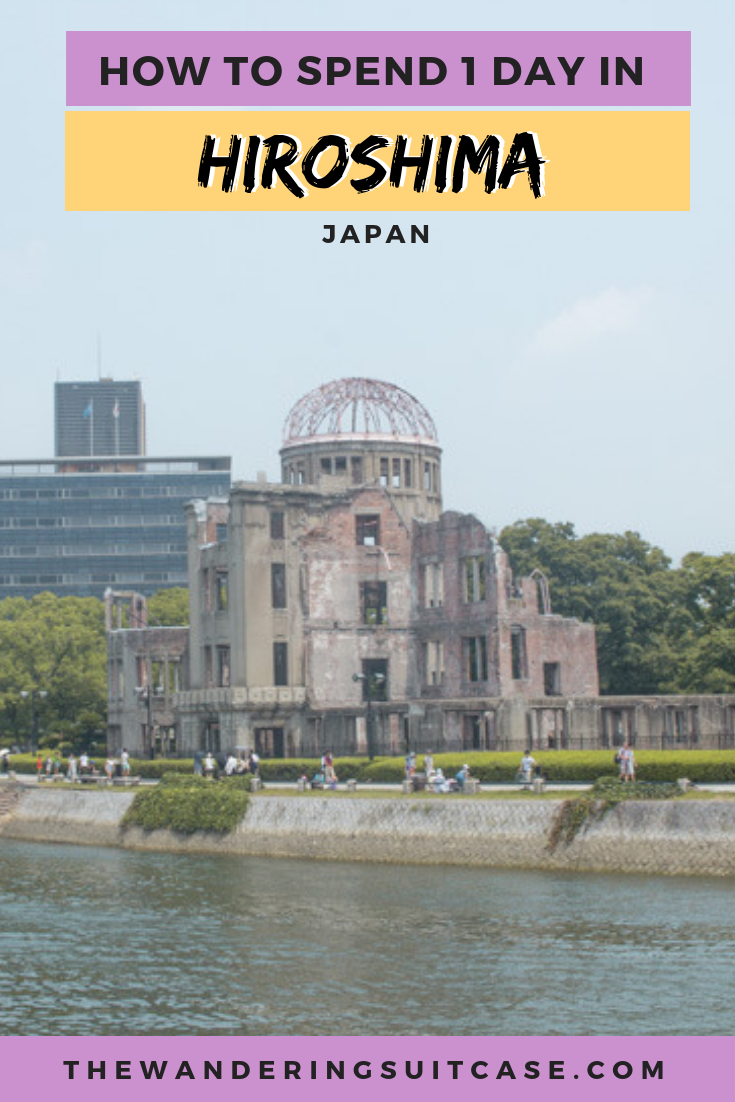 So there you have a Hiroshima Itinerary. Hopefully, this helped you plan your trip to Hiroshima!

Why hello there, new friend! I'm Mae-Gene, the travel-obsessed Aussie girl behind The Wandering Suitcase blog.

I'm obsessed with eating copious amounts of sushi and hiking in New Zealand. But on most days you can find me in my home city of Melbourne dreaming of my next adventure, working my lil' corner of the internet (this blog!) or gettin' ready to strap on my hiking boots. Read more...

34 things to know before going to Japan
Next Post: Your guide to zero waste travel in Japan